“Disassembled” by robots controlled by Gregory or pushed off the rooftop by Glamrock Freddy
"Gregory...Your friends are worried about you. They're here with me. Please come out.....Gregory, I may have lost my temper earlier, but it was just a gli-itch. It won't happen again. It's been such a difficult day for all of us. Why don't you come out, and we can play a game together....It won't happen again. It wa-was just a gli-li-tch-ch." ⸺ Vanny (FNaF Security Breach Trailer)

Vanny wears a white bunny costume that has stitching all over it, with a large pink tartan stitching on her left hip. The costume also has a right-tilted blue bow on the chest and its hands and feet have pink paw pads under them. Her bunny mask has a wide, creepy smile with small buck teeth, a pair of long whiskers, small eyebrows, and big glowing red eyes that appear to be spaced out.

Vanny appears as an active threat in few areas. In the first sighting, she isn't a threat, as she's gone by the time Freddy is out of the recharge station. Later on, she must be avoided after escaping Lost and Found.

She can appear in the Atrium once Gregory puts in the showtime disc, and her unique feature is that she always knows where Gregory is, regardless of if he's hiding or if she could reasonably see him. There has also been a report of her in the sewers.

After tricking Silver Parasol into giving her full access to The Freddy Fazbear Virtual Experience, a VR game based on the Freddy Fazbear's Pizza chain. She went into the VR game and collects hidden cassette tapes to reassembled Glitchtrap, who attached himself to the tapes and is using them as a hiding place. By following the instructions of the preceding beta tester Tape Girl and narrowly avoiding a merge with him, she manages to turn Glitchtrap into a harmless plushie within the game.

In the Curse of Dreadbear DLC, her mask can be found in the Corn Maze by collecting all of the keys and going back to the start of the level. There will be a basement door that, after unlocking the fifth key, will open when you're near it. Inside the cellar, there will be a single rabbit mask on the table. Putting it on will end the minigame. You can then find the mask in the Prize Corner at any time. If you've completed both the main story and the DLC, you can get a special dialogue by looking at the glitching spring bonnie plush. While you can't hear Glitchtrap, you can hear what Vanny is saying in response.

While Vanessa, referred to as Ness, does not appear in person, she is mentioned in the "unintended E-Mails" from Fazbear Entertainment. Before the events of Help Wanted, Vanessa was an employee of the Fazbear Funtime Service working as a security guard for the company. After she was contacted by one of the game developers from Silver Parasol Games, after they accidentally created a virus from one of animatronics' PCB. She pretended to be a Senior IT Representative from Fazbear Entertainment to trick them into giving her full access to their company to get rid of the virus. After believing that Vanessa got rid of the virus, Silver Parasol started working on the The Freddy Fazbear Virtual Experience again, only for for Vanessa to give unauthorized commands to their system, gaining full control over their system. She locked every employee out of their account.

After receiving an e-mail from Vanessa's fake credential, "_pizzaplex", it is revealed that Vanessa was researching the company's records of the Fazbear Entertainment Floor 3 employee, and that she transferred from Fazbear Funtime to work as a security guard at Freddy Fazbear's Mega Pizzaplex.

These emails also reveal that Vanny has been searching up various things that have nothing to do with her job at Fazbear Entertainment, involving things like blood, how to kill people, and masks.

Vanny appears pretty rarely throughout the game. She first appears while in the recharge station at 1AM, dancing around; Glamrock Freddy cannot see her at this point, though. She later appears on a monitor in Lost & Found, after Vanessa finishes talking. When the player escapes Lost & Found, they have to sneak around Vanny, who's dancing around the place.

Later on, when Roxy and Monty trap the player in a large office, she makes a brief monitor appearance at the start. There are also a few endings related to her, alongside tapes that appear to show her backstory. 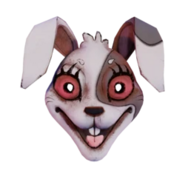 Audio to be added

Earlier in the game's development, Vanny was intended to have a much larger goal in the game, as a Vanny Meter was found in the game's debug menu. This was left unused alongside Survival mode, but is still functional.