Five Nights At Freddy's Wiki
Register
Don't have an account?
Sign In
Advertisement
in: Characters, Five Nights at Freddy's 2, Animatronics,
and 21 more

The Puppet, also known as The Marionette, is an animatronic in Five Nights at Freddy's 2. He stays in the Prize Corner, and Jeremy Fitzgerald and Fritz Smith must wind up a music box or else he will attack the player.

The Puppet is a tall puppet looking figure. He is all black and white except for his face where he has red cheeks and two purple strips going from his eyes to his mouth. He has three strips going on his arms and legs.

He functions for the main reason to check the camera, to wind up the music box. Neglecting the music box will be a game over unless the player can hold out until 6 AM.

The Puppet will stay at the Prize Corner, where Jeremy and Fritz must wind up a music box to keep him calm. If the player does not wind up the music box, The Puppet will slowly rise out of his box and come straight for the player, resulting in a game over.

The Take Cake to the Children partially reveals his origins, as he shows a child being murdered outside of the establishment by William Afton, followed by the Puppet's jumpscare implying that child possessed him. The Give Gifts Give Life minigame depicted the Puppet giving the MCI victims new life in the animatronics. As well as this, the cutscenes reveal the Puppet still had a presence even in the FNaF 1 restaurant.

As well as the Phantom Puppet, the original puppet child is seen in the Happiest Day Minigame. The Child is wearing the Puppet's mask. When all the souls are present, he gives cake to the Golden Freddy soul, and the souls disappear, symbolically showing the souls passing into the afterlife. However, the Puppets mask falls slower than the others. In the gameplay, the original Puppet can be seen, casting a reflection.

The original Puppet is depicted in Security Puppet, which is set at the same time as taking Cake. In the mini-game, he is required to find a child with a green security bracelet and keep them away from the exit, but there will be no assigned child except if the game is played for approximately three times. After playing said number the minigame takes quite a dark turn, the assigned child is outside the establishment while the Puppet is trapped because of a gift box being placed on top of his box.

The Puppet goes outside but is damaged by the rain. The Puppet encounters the assigned child's dead body and the now broken and discolored Puppet crawls to it. Once the Puppet crawled up to the dead child's body, he deactivates, hugging Charlotte's corpse, thus allowing her to possess him.

It should be noted the Puppet is vulnerable to the Death Coin.

The Puppet as depicted in a brightened teaser.

A hallucination of the Puppet after he leaves the Music Box

The original Puppet in CAM 08.

The Puppet in Happiest Day.

The Phantom Puppet is the final antagonist in the game Five Nights at Freddy's 3 and is one of the six phantom animatronics in the game. It is a hallucination of a burned and damaged Puppet.

The Phantom Puppet appears much like its Five Nights at Freddy's 2 incarnation, though its body is charred and its eyes have small white irises, much like the other phantoms. Its charred and burnt appearance possibly foreshadows the torching of the attraction.

The Phantom Puppet is used to obscure the player's vision long enough for Springtrap to get very close to you and then to leave causing an Audio error (when entering) and a Ventilation error (leaving). In addition, many people believe that the Phantom Puppet is the most dangerous Phantom as it obscures your vision for about 15 seconds or so and causes two errors.

As almost every Phantom, The Phantom Puppet lacks a movement pattern and at random intervals will appear standing in the CAM 8 hallway and you will have to put the monitor down before it appears in your office.

He is also one of the non-canon nightmare animatronics released in the Halloween update, along with Nightmare Mangle.

Out of all the nightmare animatronics, Nightmarionne seems to be the "skinniest". He generally appears to bear many resemblances to the original Puppet from the second game. His body greatly resembles to that of a tall human skeleton, being tall and extremely thin. Unlike The Puppet, Nightmarionne doesn't have three buttons on his chest. The most significant changes are him sporting a large smile full of small, sharp-looking teeth with its upper lip having more teeth than the lower jaw, as well as also being much darker in color to the point of being colorless and sporting longer, even lankier limbs and torso, the latter sporting three sets of protruding ribs. His head structure is very similar to the original Puppet with the exception of lacking rosy red cheeks. His lipstick and tear-like stripes are black in color as well. His three fingers also seem to be longer, thinner, and whip-like each with four white stripes, while the arms are little bit short and lacking stripes. His fingers are divided further down the arm, making them longer and more similar to branching arms. His legs are very long with a needle-like point at the end each, and also lacking white stripes. His white pupil-like eyes are very similar to the phantom animatronics' eyes from the third game, especially when brightened.

Nightmarionne behaves exactly like Nightmare, meaning that he can attack from the bed, closet, left hall, and right hall. Being a replacement of Nightmare, Nightmarionne only appears in Nightmare and 20/20/20/20 from 4 AM on. He can appear in any night with the All Nightmare challenge turned on.

When Nightmarionne is active, the music of the Music Box from Five Nights at Freddy's 2 will play instead of Nightmare's laugh. While sharing the same strategy of Nightmare and Nightmare Fredbear, the player must pay close attention to the music box sound Nightmarionne makes to tell which direction he's going when defending themselves.

Similar to Golden Freddy from the first game while jumpscaring the player, Nightmarionne's close-up screen will appear with light-bluish colors and lack of teeth. In addition to its jumpscare, he shares the same strange radio-like noise as Nightmare. 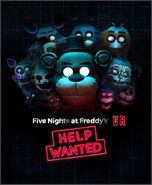 Nightmarionne (centre-left) in the official poster for Help Wanted.

Nightmarionne in the left hall

Nightmarionne in the right hall 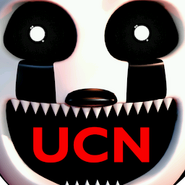 Nightmarionne in the games icon

Nightmarionne’s picture in the roster

N/A
Lure. Encapsulate. Fuse. Transport. Extract. (Also known as Lefty) is the fourth salvageable animatronic from Freddy Fazbear's Pizzeria Simulator. It is one of the main antagonists.

Lefty is one of the salvageable animatronics in the game and appears on Thursday. If you decide to salvage him, Michael Afton must go through a series of events such as shocking him and documenting responses of the animatronic. If the player fails this you will receive a jumpscare. The man on the tape recorder will play sounds that will make Lefty more aggressive and make him come closer. The player will need to shock him to neutralize him. After the fifth audio prompt, the salvage ends and you get $5000 for the salvage. However, he can also be purchased from the Rare Finds Auction catalog for $5, with a high risk of 9.

As revealed in the Insanity Ending LEFTE blueprint, this Animatronic was designed to contain The Puppet and bring it to the Pizzeria as part of Henry's plan. At some point after Five Nights at Freddy's 3, he captured it and brought it to the Back Alley on Thursday. The Puppet within it still wanted to protect any children from the other animatronics, and misguidedly attacked Michael Afton, due to still distrusting adults. Eventually, on Saturday, it was burnt with the rest, with her father apologizing that no one was there to save his daughter and telling her to rest.

It should be noted Lefty is vulnerable to the Death Coin.

Lefty looks similar to Rockstar Freddy but with a black and gray color along with a red bow-tie and hat, he also has 1 yellow eye on his left but his right eye is a glossy black color, he also had red eyelids and red kneecaps, he also has a microphone that has a yellow color.

Lefty’s docile stage during his salvage

Lefty in the Office.

A secret screen of Lefty in the alleyway 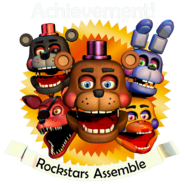 Lefty along with the other Rockstar animatronics in the Rockstars Assemble achievement. 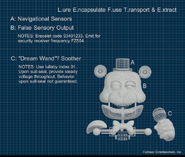 Lefty’s picture in the roster

Lefty looking at the camera

Lefty walking towards the exit

Lefty about to escape the closet