Five Nights At Freddy's Wiki
Register
Don't have an account?
Sign In
Advertisement
in: Characters, Animatronics, Sister Location,
and 10 more

The Minireenas appear with Ballora for the first three nights, although they aren't lethal until Night 4. During Night 4, in the Scooping Room, Michael Afton has been hidden inside an old springlock suit and must wind the locks while fending off multiple Minireenas. They climb up the sides of the suit, forcing him to wiggle to avoid being jumpscared, which in turn slightly loosens the locks. Some may climb into the suit but do not harm Michael directly.

In the non-canon Custom Night, the Minireenas have two different AI options:

Minireenas 1 disintegrating after being given a controlled shock

Minireena appearing inside the popcorn in the Fake Ending 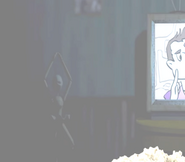