Five Nights At Freddy's Wiki
Register
Don't have an account?
Sign In
Advertisement
in: Book Characters, Humans, Souls,
and 4 more

Killed by William Afton
Michael Brooks, or Mike, is the counterpart to Michael Afton as well as the soul in Golden Freddy seen in The Novel Trilogy.

Michael is a young boy, roughly 6 or 7 years old. He has brown hair, which spikes out on the edges. His shirt is a light blue color, with a V-shaped collar, complete with short sleeves. His ears stick out like a monkey's.

Like with the other victims of the Book MCI, the method had actually changed. However, the method in the Fourth Closet is not revealed.

William, within what is implied to be the Golden Freddy suit, had approached the five children - Susie, Fritz, Cassidy, Gabriel, and Michael - and had lured them into the back. Back there, he slaughtered all five, before stuffing them into the suits.

Prior to his death, Michael Brooks was one of the friends of Charlotte Emily as well as most of the other protagonists. Carlton Burke was his closest friend over the years. He had been separated from his friends, and ended up following William Afton into a back room of Freddy Fazbear's Pizza, at the time believing him to be Spring Bonnie. In the back room, Michael had been murdered, and promptly stuffed inside of Golden Freddy.

Ten years after his death, Charlotte and her friends were gathered together for an event made in Michael's memory. At this event, an unidentified school prinicipal, Michael's parents, and Carlton all gave remarks on Michael and shared their memories of him. Afterwards, Charlotte, Carlton, John, Marla, Jessica, Lamar, and Jason went back to Freddy's a few times. During one of these returns to Freddy's, William kidnaps Carlton and locks him an unidentified blue springlock suit. While trapped in the suit, Golden Freddy appears to Carlton in the same room and reveals the truth that he, Golden Freddy, is indeed Michael Brooks. Afterwards, Charlotte saves Carlton from the suit and knocks Dave Miller, who turns out to be William under an alias, unconcious. Carlton reveals that Michael possesses the Golden Freddy suit to Charlotte, who appears to recognize the yellow bear as Fredbear. Not long afterwards, Freddy Fazbear, Bonnie, Chica, and Foxy, who are all also possessed by the spirits of the missing children, corner and surround Charlotte and her friends, about to kill them. Suddenly, Michael Brooks appears through the Golden Freddy suit and orders the animatronics to stand down, letting Charlotte and her friends live.

A photo of Michael 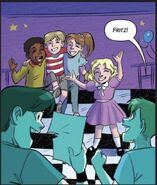 A group photo of Michael, as well as Carlton and the rest of the Missing Children