Hallucinations are easter eggs in the Five Nights at Freddy's series. They happen randomly, and usually Freddy's face pops up on the screen, along with the text "IT'S ME" and then Bonnie's face with/without eyes. Sometimes, when you start the game, you may see one of these images before the screen reverts to the menu.

Endoskeleton, and masks looking into the camera. 1/20 chance.

IT'S ME Hallucination. 1/1000 chance every second.

Second ITS ME, also a part of the hallucination.

Freddy's face with human eyes. Plays with IT'S ME hallucination.

Golden Freddy(aka Yellow Bear)'s killscreen. Plays if the player stares at Golden Freddy for 5 Seconds in the Office. Also has a 1/10000 chance of playing for every second the GAME OVER screen is open.

Golden Freddy's poster on the wall. 1/100000 chance when camera opened on any night.

Children crying on the wall. 1/100 chance when camera opened.

Poster of Freddy ripping his head off. 1/100 chance when camera opened.

Upon viewing the camera and looking at the Parts/Service room you can see Withered Bonnie in a slumped over position similar to that of Golden Freddy. Rarely, if Bonnie has left the room, a figure resembling Freddy but much darker and purple will replace him, in the same position only looking at the camera without turning its head. When this entity is viewed for a long period of time, it will cause the player's game to crash.

RWQFSFASXC, also known as RXQ or Shadow Bonnie, is a hallucination which may appear when the player has lowered the monitor. It has similar effects to those of "Shadow Freddy" except for the fact that it does not appear on the monitor. It made an appearance in FNaF World where it gained an official name, even if it is just a keyboard slam.

On another rare occasion a paper plate doll will disappear from Party Room 4 and reappear on the wall of the security office. This is purely cosmetic and does not affect any other elements of the game.

A hallucination of The Puppet in the Main Hall. You have a 1/50 chance everytime you flash your light on the cameras to see the Puppet for 110 milliseconds.

Shadow Bonnie in the office. Much like Golden Freddy from FNaF 1, Shadow Bonnie has a 1/1000000 chance of spawning inside your office. If you stare at him for 4 seconds then your game will crash.

Five Nights at Freddy's 3 doesn't have too many hallucinations like the first 2 games, but there are hallucinations nonetheless. We will not be counting Phantom Animatronics in this list as they are not easter egg hallucinations.

Shadow Freddy in the Five Nights at Freddy's 3 office. 1/10000 Chance every time you open the camera.

Both Paper Pals in the Five Nights at Freddy's 3 office. 1/10000 Chance every time you open the camera for each Paperpal.

Cupcake on desk. 1/10000 Chance every time the camera is opened. 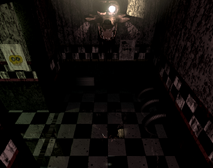 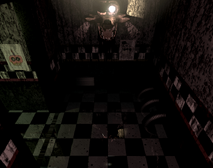 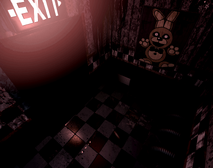 Five Nights at Freddy's 4 has only a few hallucinations.

Flowers on bedside (Brightened). 1/100 chance every time you turn around to an empty bed.

Pills on bedside (Brightened). 1/100 chance every time you turn around to an empty bed.

IV bags on bedside (Brightened). 1/100 chance every time you turn around to an empty bed.