Five Nights At Freddy's Wiki
Register
Don't have an account?
Sign In
Advertisement
in: Game, Spin Off, Special Delivery

The player (When actually playing)

Five Nights at Freddy's AR: Special Delivery is an augmented reality game developed by Illumix in collaboration with Scott Cawthon. The early access was released on 22 November, 2019 and the game was officially released on 25 November.

Five Nights at Freddy’s AR: Special Delivery is the next terrifying installment in the FNAF franchise. Players will confront malfunctioning animatronics in their real world and attempt to survive these horrors come to life. Through the game, players subscribe to Fazbear Entertainment’s brand new “Fazbear Funtime Service” and get their favorite animatronics on-demand. Due to unfortunate circumstances, the visiting animatronics malfunction and attack subscribers instead of entertaining them.

Players must confront an endless stream of hostile animatronics that will follow them wherever they go. The question is, how long can players survive? And just what is happening at Fazbear Entertainment?

Various animatronics from previous games have returned in this Augmented Reality game! More get added over time, so the list is subject to change

Within the game's files are a set of characters which have not yet been released. Please be aware that this list will contain spoilers, and all characters seen here can get removed at any time.

NOTE: Icon isn't referring to Overworld icons, rather the icon on the CPU.

Most animatronics have a similar strategy. Keep track of them with your flashlight, avoid looking at them when they haywire(Some may have different haywire mechanics), and shock them if they uncloak. Notable exceptions are Mangle, Ballora, Shadow Bonnie, and Plushtrap.

Shadow Bonnie's main strategy is different. You must shine your light at him, hoping to get him before he gets you. By shining your light, the dark remnant fog on your screen will disappear. You can also run away from him if the Occlusion feature is on.

Alerts are a feature which will appear randomly. These feature text appearing at the top of the screen, with their own textbox, acting as lines from the animatronic. These often appear randomly while on the map, although it's possible to get them after an encounter as well.

Despite being Generic alerts, these alerts appear to be directed towards the Nightmare animatronics specifically. It is unclear if these were intended to be hints, or were coincidental.

Alongside all of these, Funtime Freddy has one as well.

Note: Not all bugs may be listed here, be it due to a lack of documentation, or other reasons.

The Dark Circus: Encore is the first paid DLC for the game, and consists of a mixed reality environment that takes place in, as the name implies, The Dark Circus. It is a one-time purchase, and can be replayed from the start however many times the player chooses.

The Dark Circus: Encore DLC consists of a few puzzles that must be completed. These are split into eight tasks, with these being split between two locations, alongside a ninth task that requires completion of the other eight. These tasks are on a time limit, with the timer going lower as more tasks are completed in that location; Running out of time will result in a jumpscare, with the timer resetting. The player can walk around by either tapping the screen, or walking in real life. Turning the camera functions just like in encounters.

The first task is located near Ringmaster Foxy; Head towards Foxy, and then take a left. The task features four number codes, which spawn randomly around the map; They can spawn on either pieces of paper that can be seen, or cards that only spawn if they're chosen. Each stage has a different amount of digits, each corresponding to which stage you're on.

Completing the first task and walking into Ringmaster Foxy's line of sight will trigger an encounter against Foxy, taking place in a circus-themed Mixed Reality environment. Foxy functions as normal.

The second task is in the hallway, leading towards Ballora. This task is a sequence of colored symbols; These also spawn randomly on various objects, although this time it spawns on bottles and balls. The first code can spawn directly below the task!

As the second task is completed, different lights appear on top, unlike the green lights for the first. Completing the task will trigger an encounter against Ballora upon entering the trigger zone, which features the same mixed reality environment.

Once Ballora is defeated, head to Ringmaster Foxy's stage. The third task, which was present behind him, will open up at this point; This is another symbol task. The code is always shown by the second task's lights.

Upon completing the third task, Golden Freddy's face will appear on the screen, fading in and out. After a few seconds, it will automatically transition to the cutscene of Great Escape, having broken the glass. This then begins the third encounter, against Great Escape Golden Freddy; Golden Freddy still functions as normal.

Defeating Golden Freddy will show a cutscene, and afterwards, the player will receive the Plushsuit and Profile icons for Great Escape Golden Freddy, alongside Golden Freddy's CPU. 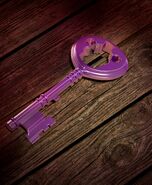 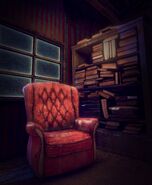 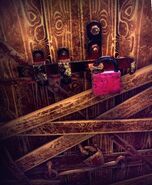 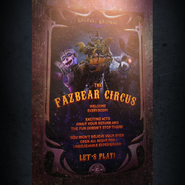 In earlier versions of the game, Various text files were left over. These include lore reveals, under the name 'Faz-Facts'. They were later verified by Scott Cawthon himself to still be canon, and thus can be used.

Although the initial purpose is left unclear, various Alert messages are left over in the files.

Within the game, a countdown to Halloween appears. These are programmed to have initially started on October 23rd, 2019. Interestingly, the dates are before the game's initial release, suggesting that an earlier release date was intended. These also have unused sounds programmed to play when they appear.

Rather than an additional reminder being sent out on Halloween, an email is programmed to be sent instead.

Interestingly, These alerts reveal Plushtrap's personality to be more friendly and playful than the other animatronics.