On Night 1, Michael Afton is instructed by HandUnit to check on her. Seeing that she is not on stage, the HandUnit instructs Michael to give her a controlled shock. After doing so, Michael sees Ballora performing on her stage.

On Night 2, Michael is again instructed to check on Ballora by HandUnit. After checking on her and seeing her shadow, the HandUnit instructs them to "zap" her.

Ballora is only active in Ballora Gallery on Night 2. The main point of the night is to crawl to the Breaker Room with a flashlight to guide Michael while avoiding Ballora. Ballora uses audio cues, relying only on the sounds Michael makes to find him. The player also needs to pay close attention to the music Ballora makes; the louder the music, the closer Ballora is. If the player runs without checking or moves while Ballora is near, she will jumpscare him, resulting in a game over.

In Night 3, when Michael checks on Ballora, the Minireenas are seen holding her dismantled body parts, but HandUnit believes that everything is fine due to the fact that Ballora is technically on her stage.

In Night 4, Ballora is transferred into the Scooping Room by two unseen characters and subsequently "scooped" - dismantled from the inside via a scooper machine, thus freeing the Minireenas to attack Michael. She is then used, along with the other animatronics, to create Ennard.

On Night 5 Baby claims that Ennard is Ballora, without her shell, to lead Mike into a false sense of security. During the Real Ending, along with other animatronics, Ballora's empty shells are seen from the Scooping Room.

Ballora is audio-based. In order to survive, you must avoid moving too much, else you'll draw Ballora closer. In order to tell how much noise you're making, or how close Ballora is, look at the bars between the Battery percentage and the Flashlight button. Be careful though, as minireenas will attempt to block your view; Simply shake them off quietly to remove them. Attempting to look at Ballora will also result in a jumpscare.

In order to defeat Ballora, you must find 3 broken Minireenas, then look for Ballora's location. Upon finding her, collect the Minireenas. When she charges, simply look at her and she'll be stopped.

Is someone there? I can hear someone creeping through my room... perhaps not.

Why do you hide inside these walls? When there is music in my halls.

All I do is dance alone. But now I hear your flesh and bone.

All I see is an empty room no more joy- an empty tune.

It's so good to sing all day to dance, to spin, to fly away.

I roam these halls alone all day, but now you're here, friend and prey.

Save me a dance for another day, perhaps? 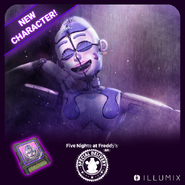 Arctic Ballora is a skin in Five Nights at Freddy's: Special Delivery, introduced in Week 2 of the Winter Wonderland event. As she is a skin, her mechanics are identical to Ballora.

Arctic Ballora is similar to Ballora, although recolored to be a light cyan color. Similar to Freddy Frostbear, Her suit is completely made of ice, featuring a blue glow along with it. Across her body is several ice spikes, mostly around her neck and replacing her skirt. She also has an Ice Mohawk.

Her secondary color, around her mouth or spread around her eyebrows, has been changed to a pink color.

to be added
Community content is available under CC-BY-SA unless otherwise noted.
Advertisement